Sensational Saturday - it is sensational to give your spouse something real at home.

Each Sensational Saturday throughout the month of October will be dedicated to sharing some of the best marital advice I have gotten from friends. I have been happily married for 22 years and I have to admit that it is in part due to advice I got from some people who were close to me.  This week I will be sharing advice I got from my 72 year old grandmother-in-law to be  who told me I should give my husband everything he wants at home so when someone on the street offered it to him, he wouldn't be tempted because he had it at home. In upcoming weeks I will be sharing advice I got to:

I am sharing this information not to give you advice on how to run your marriage, but to share what worked for me. In some cases the advice will  give you a laugh about some of the things my friends say.

My husband's maternal grandmother was one of my favorite in-laws. She was tough, funny and bossy as heck. She passed away this year and she is missed by more people than you can count.  When I met her she was about 72 years old, yet I still would not have wanted to get into a fist fight with her. In her life, Grandma had five husbands and two serious boyfriends. I am sad to say, all of her husbands died which is why she ended up with the two boyfriends (one at a time, not at the same time). She said she did not want to kill off any more husbands. One Saturday a few months before we got married, Darren and I went to visit Grandma. We spent the afternoon sitting around talking and hearing some rather good stories from Grandma. Towards the end of the afternoon she told me, "Baby, that is my grandson and when you marry him you need to give him everything he wants at home so when those fast tail girls in the street offer him something he won't care because he already has it at home."

Aretha Franklin: "Giving Him Something He Can Feel"

I will admit, I was shocked. Grandma was 72 years old. What the heck was she doing telling me to give my husband anything he wanted at home in order to ward off hootchies in the street! At the time, I laughed and thanked Grandma for her advice. I was a young, 22 year old, not yet a bride and I was a little embarrassed about having this conversation with my Grandma-in-law to be.  Later though, after Darren took me home, and I was home alone with my thoughts, I, well thought. I thought about what she said a lot. Grandma had five husbands and I had none. I was a good Christian girl. I wanted my husband to be faithful and for my marriage to last. So, of course I had to consider Grandma's advice.

I will not go into all the details, but, I took Grandma's advice. I tried to do and be what my husband wanted so he did not have to look twice at things in the street. Before my readers get excited, this was not just about intimate issues. It was about so much more. Darren really liked and likes smart women. This was easy to do, after all, I am a genius! But I have always spent time cultivating my intelligence. I read a great deal on numerous topics, I was going to do this anyway, but to keep my husband happy, I added baseball, politics, science and science fiction to my reading list. That way, I knew all about the subjects that interested him. Since those early days I have learned to appreciate chess, poker and all kinds of weird television shows.  I was and am the things that interested him. I shared his interest and along the way, an interesting thing happened. His interests became my interests. It is funny because some of the things I kept an interest in after Darren moved on to other things. 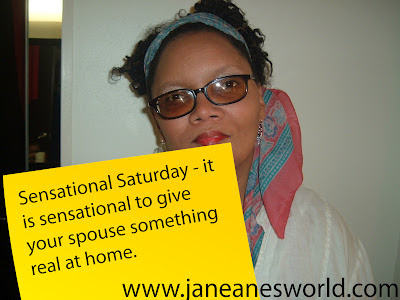 The great thing about Grandma's advice was that Darren took it also. He learned about the things that interested me. For example early in our marriage when I bought a knitting machine, Darren learned how to make cables with it before I did. When I went to law school, Darren learned about adverse possession and could recite the ECHO principles with any 1L student. Recently, as got more and more into blogging, Darren became a blogging enthusiast. For all of our relationship together, Darren has made my dreams his dreams and I love him for that.

If you and your spouse give each other something good and real at home it keeps the marriage spicy and strong. So the question for you this Sensational Saturday is, what is your secret to a strong healthy marriage?