Magnificent Monday- we learned how to push her tongue out of the way and just like that, aahh, she survived.

Gloria Gaynor "I Will Survive"

My big twin, was seven pounds seven ounces when she was born. Her sister was five pounds five ounces. My twins were born at 36 weeks when I was 40 years old. This was a high risk pregnancy for many reasons. The reasons included my age, the fact that I was carrying twins and my previous Cesarean section. It was a miracle that I carried my twins inside me for 36 weeks. That is a miracle because most people that age, do not carry twins for that long. It was also a miraculous situation because of how big each of the girls was at birth. I almost died due to complications with the Cesarean delivery but the twins were perfectly healthy and fine. The girls were strong, healthy, happy and wonderful in every way.

After I recovered from the delivery the twins were brought to me. I began what would soon be a new habit - breastfeeding twins at the same time. It took a while to get used to feeding both girls at the same time. But, it was one of those things, it has to be done, so you do it. During those first few days, it seemed as if all I did was nurse the twins and change diapers. I do not remember showering, eating or changing clothes.

Despite what seemed to be feeding babies almost 24 hours per day, something was wrong. After being home from the hospital for one week, the big twin was down to five pounds three ounces.  We had been going back and forth to the pediatrician's office everyday for the first week. The big twin was losing more and more weight and we were afraid. Finally, on Saturday morning, our pediatrician told us she would have to be admitted to the hospital because she had lost so much weight she was in danger of dying, that day. At the hospital she was admitted to the NICU, neonatal intensive care unit and underwent so very many tests. 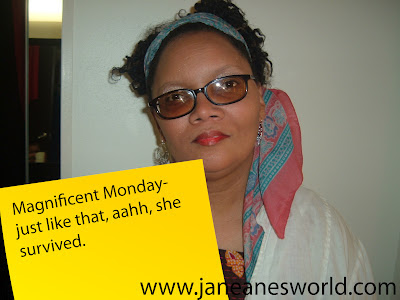 In the end, it turned out that though she was on the breast and eating, she kept her tongue in the way and so was not getting all the milk she should have been. The therapists spent hours pushing her tongue out of the way so she could learn to eat properly. After being in the hospital for a week, learning to eat and gaining weight. It was time for my big twin to come home. As I packed up the hospital room and prepared to go home, I looked at my even tinier little baby and said, aahh, she survived. So the question for you this Magnificent Monday is what is your favorite story about survival?

Add a link to your favorite blog post about survival.