Terrific Tuesday - I am courageous in the face of obstacles and challenges and that is terrific.

A few weeks ago a Facebook friend shared with me a Vlog she had done asking a group of women to name something at which they excelled. She talked about how the group of incredible women were reluctant to talk about what they thought was good about themselves.  I was intrigued by that idea and thus the idea for September's Terrific Tuesdays was born. Each Tuesday throughout the month of September I am going to write about something I find terrific about myself. I invite you to spend this period thinking about what is terrific about yourself and sharing it with the world.

The Cowardly Lion on Courage from the Wizard of Oz

This week I am celebrating my courage. Courage is commonly defined as the quality of mind or spirit that allows a person to face challenges without fear. This is another of those qualities I possess, but know is a gift from God. As a Christian woman, I know that my God has not given me a spirit of fear, but has given me a strong heart and a strong mind. You need courage in the world today in order to get where you want to go. Fear, doubt and procrastination keep you stuck in place and away from the goal line.

In addition to my paying jobs, I am a wife and mother. Neither of those is a job for the faint of heart. As a wife I need courage in order to remain trusting and to stand by my husband no matter what troubles may come our way.  As a mother I need courage to stand between my children and whatever is foolish enough to think it can harm my babies. Courage is the thing that makes a woman think she can start a business and make it grow. It is also courage that makes that woman pick up and start a new business if the first one does not work out as she plans. Courage is the thing that makes us realize that if plan A does not work, it is OK, because there are 25 other letters in the alphabet. 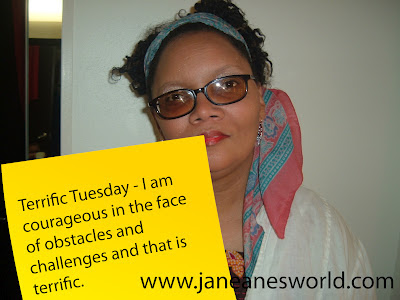 If you do not have courage of your own, do not despair. If you want courage and do not have it, it is one of those fake it till you make it situations. I have employed the fake it till I make it challenge on many occasions. One thing I learned is that most obstacles, problems and situations do not know your courage is fake. If  suck it up, put on your big girl panties and keep faking it, you will be able to get through the situation just fine until the real courage shows up. So, the question for you this Terrific Tuesday is how are you going to find and use courage?